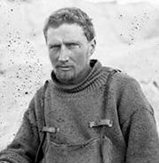 Australian Frank Stillwell was the grandson of a printer from Shoreditch in London who emigrated to Australia in 1855. Frank studied science and mining engineering at Melbourne University from 1907 to 1919 and obtained a Doctor of Science. During this period he spent 17 months as a member of the Australasian Antarctic Expedition under the leadership of George Mawson. He never lost his links with the Antarctic and this is memorialised in the naming of Stillwell Island and Stillwell Hills (see “Stilwell Places” web page). After WW1 he was a geologist in the Australian mining areas including Bendigo and Broken Hill. He specialised in the efficiency of extraction of minerals from ores. From the 1930’s until his retirement in 1953 he worked at the University of Melbourne continuing his research and lecturing BSc students. He published 68 scientific papers, mainly on mineragraphy. Many honours came his way and he was generous in awarding legacies to the mining and science community. As a true Australian he was a keen sportsman and played many sports. He never married but was devoted to his family and friends, as well as to science and loyal colleagues. A full memoir can be found <here>.