I originally believed that the pond was one of the “High Stilwells”, but after a lot of investigation I now believe this to be man-made and dating from the early 1800s, and probably from a lot earlier. The feed seems to be entirely via drainage from the village roads where there are a number of springs (Style-wells?) that sprout up in wet weather. The location of the pond is important. The pond was a central collection point for spring and rain water, being the lowest “common land” in the village. From the pond the lie of the land drops sharply down, over private fields, towards the lakes in the valley. The pond was probably dug out for two reasons. Firstly, as a storage area to provide water all year round to feed stock (mainly sheep and horses) in an area that would probably have been dry during normal summers. Secondly, the underlying geology of the area is Greensand which typically has a 25-30% clay content. The residue from the excavated pond would have made good brick material. A clue is that the field above and behind the pond is called Kiln Field on the old tithe maps. The pond lining is clay puddle, which would not be a natural occurrence. 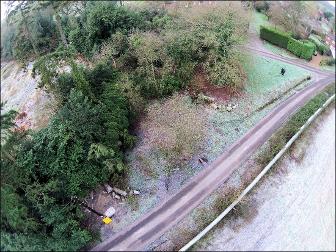 In 2014 the state of this pond was a disgrace and had deteriorated badly in just 5 years through lack of care and maintenance by the residents. The pond severely flooded in the winter of 2013/14 and the lane alongside (one of the only the two decent access roads to Bowlhead Green) was closed for 3 months. I decided that the pond needed renovation, if only because it was the last visible link with “Stilwell”.

The photographs to the right were taken from a drone, and show the pond area in December 2014. I hadn’t been a wet December and so there was little water in the pond as can be seen in the photographs. Normally, in any December, the pond would be full. The main reason the pond was not holding water was that a number of trees had breached the clay-puddle lining with their roots and the water had seeped into the very porous sand underneath. There were tree “rogue” alder trees growing out the pond and the two large willows alongside the pond would have also caused problems with their roots. 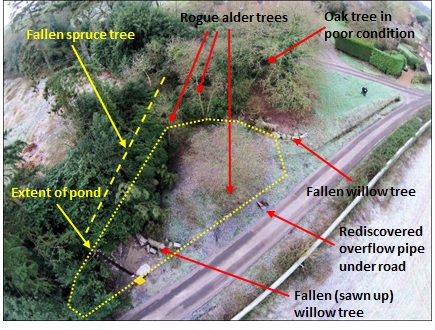 The willows had fallen down in the very wet winter of 2013-4 and been sawn up and left in place. This is evident in the lower picture above. All along the back of the pond was a very large spruce tree that had also fallen down in the winter floods. The trunk of this tree was completely covered in ivy which considerably increased its weight and wind resistance and caused it to fall in the winds. On the “green” alongside is a mature oak also in poor condition and being strangled by ivy. If you are wondering what the little black speck on the grass top right is, that is myself and the drone pilot.

The pond is within the Bowlhead Green conservation area. The local council (Waverley BC at Godalming) have been approached and are very supportive of this project. Their permission was given to fell the alder trees, remove the lower limbs of the oak tree to raise the canopy and to fell some other small trees on the back edges of the pond. The drainage into and out of the pond needed re-instating and Surrey County Council have acted with commendable speed and cut new drainage ditches to prevent future flooding and cut a new feeder ditch to the pond, which was sorely needed. As of the summer of 2015 the whole area around the pond had been cleared of unwanted trees and foliage, almost entirely single-handed by me. The excavation of the silt and clay in the pond is too much for a few people with spades and the laying of a permanent pond liner (to replace clay puddle) is a specialist job. A specialist has been engaged to do all this and a cost obtained. It is hoped that a grant from Surrey to pay for this work will be successful over the autumn of 2015. A montage of before and after photographs, as a download pdf file, can be seen by clicking the link below. This will be updated as major milestones are reached. The link for the aerial view dowloads an AVI video of Bowlhead Green taken in December 2014 (afrosty morning). All but the first quarter of the video covers the area that would have been High Stilwells. The video starts and finishes with the pond area bottom left.

Before and after photos

By 2019 the pond had matured well with water lilies and plants brought from another pond nearby. The main feeder ditch has been lined with an excellent product called Concrete Canvas (A British invention made in Swansea – www.concretecanvas.com). This means the run-off rainwater from the road now flows well down towards the pond and the mud dissipates onto the ground before the pond and prevents too much silt running into the pond. The ditch still needs periodic cleaning out though. A stone cill has been added at the outlet ditch that runs under road and this has raised the normal water level a little. The pond is unable to take more water than in the latest photos as that would mean the water level being higher than the clay lining and so excess water would simply drain away to the side. I also planted a Rowan tree (native to the area and not too big that roots would affect the pond clay lining) on the LH side of the pond – opposite end to the oak tree – to provide shade and beauty in future years. The village is supposed to be keeping the surrounding areas clear and mown but they have failed to do this along the wall on the other side of the lane. The nearest resident does an excellent job of keeping the grass area around the oak tree under control.