The surname Stillaway is quite rare in the UK and even rarer in other parts of the world. The only place outside the UK you are likely to encounter someone named Stillaway is in Canada and Australia.

The name Stillaway is a mis-spelling of Stilwell or Stillwell at baptism time. It is easy to imagine the curate asking the father, who may be illiterate, for the name of the child and hearing “Stillaway” in place of “Stilwell”, and recording the name phonetically. Research has shown that every Stillaway who appears in the UK BMD or census records comes from one of a very few areas of southeast England which are also populated by Stilwells. Most Stillaway families have been traced back to Stilwells. In fact, some had the name Stillaway for just one or two generations and reverted back to the correct Stilwell or Stillwell spelling. However, in some cases the mis-spelling stuck and subsequent generations stayed with that name.

Some of the mispellings were variations of Stillaway and the most common were Stillway (no middle “A”), Stilaway (one “L” in the middle) and Stilloway (“O” in place of “A”). Only the “Stillaway” spelling got carried through to the 20th century though.

The following map shows where the name appears on BMD records, and for what period. For clarity, some single baptisms at nearby villages have been left off, and the migration of the Henfield Stillaways to surrounding villages in Sussex is just noted by arrows. The things to note are: the area of the map was extensively populated by Stilwells; and both that name and Stillaway appear almost exclusively in that part of the country until the arrival of the railways in the 1840s. There are two Stillaway families that are described in more detail below the map – The Henfield and Essex Stillaways. 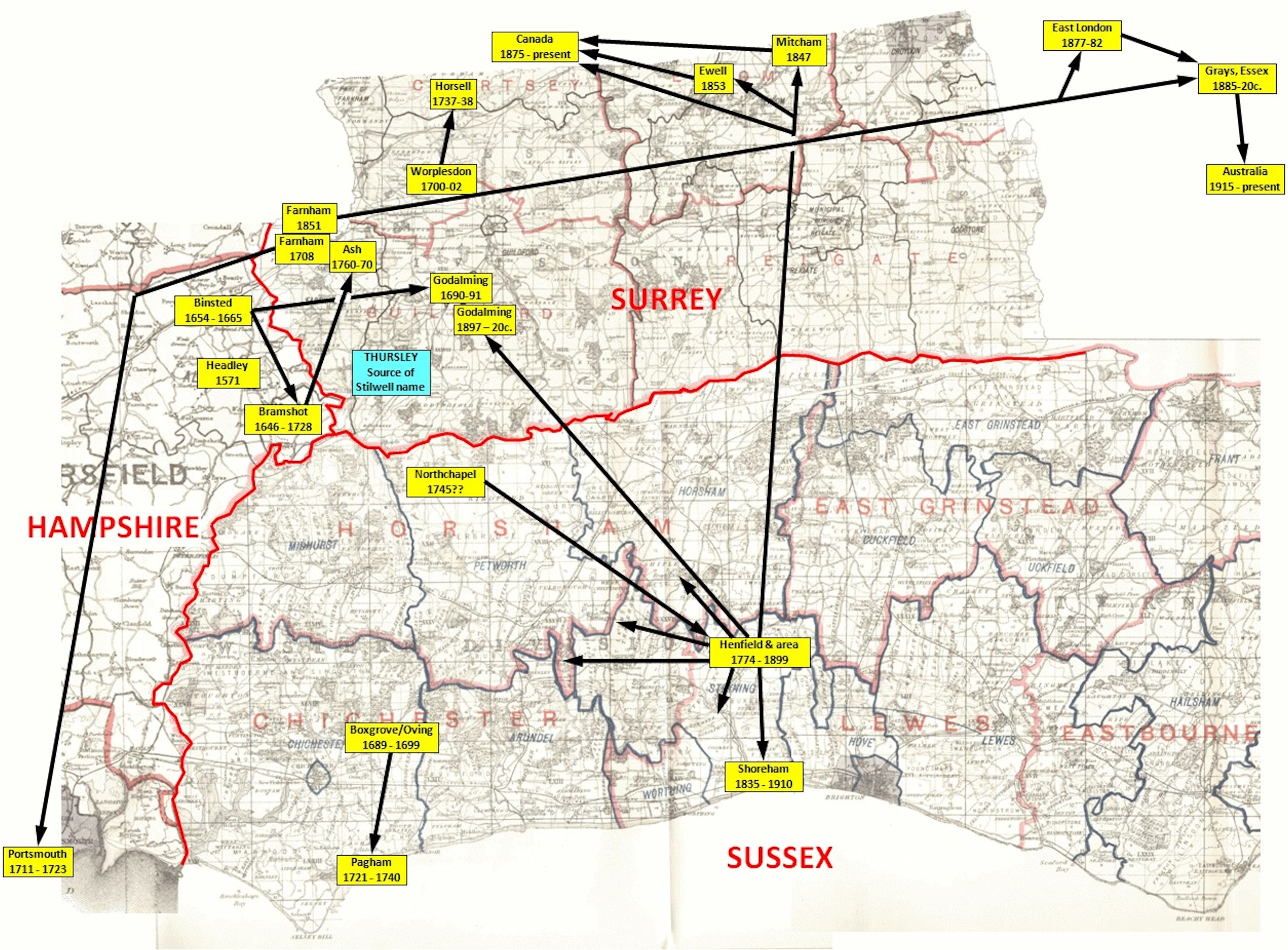 The founder of the Henfield Stillaways, William, is the only person who cannot be confirmed as definitely being a Stilwell. This is because excellent research by Mandy Willard has shown that William, born in Northchapel, also went by the name Cobby (sometimes written as Cobbe), yet his children were baptised in Henfield as Stillaway and that the family name could have been “Stilve”. This last surname has appeared elsewhere in Sussex and has been another miss-spelling of Stilwell. William Stilwell, alias Cobby, was sent back to Northchapel from Henfield under a Poor Law order. Note that Henfield parish thought his name was Stillaway and that the Cobby was an alias. The records are not complete enough to come to a firm conclusion but William probably was a “Stilwell” and for reasons unknown also called himself Cobby – a family name that is common in Northcapel.

Whatever his real ancestry, he travelled some distance from Northchapel to Henfield and married a local lady in 1773. The reason for him travelling from one remote agricultural village to another, some miles away and without any main tracks or roads linking the two, will always be a mystery and does suggest he was trying to get away from someone or something. The family settled well in Henfield and became agricultural labourers there and in surrounding villages for the next 4 generations. Only in the 1891, 1901 and 1911 censuses is there evidence of a migration away from the area for work. Most went south to the coast where there was more opportunity for work but one, an Albert, settled in Godalming as a baker. Another exception is James Stillaway who moved to London and married a London lady in 1845 and had two sons; one in Mitcham and the other in Ewell. He was a gardener and it is assumed he worked in these areas because there were many large midlle class houses in both these towns. The two sons, James and Thomas, emigrated to Canada along with a cousin from Henfield. James married before sailing in 1870 but Thomas travelled out alone and married in Canada. The cousin, James William Weston Stillaway, also married in England and sailed out immediately with his bride in 1874. The descendants are still in Canada today.

This family settled in Grays in Essex. As Grays is a town on the Thames estuary it is not surprising that most males in this family became involved with the sea. Quite what they were doing in Grays, when they originated from Farnham in Surrey – a solid rural argicultural town – is another of those mysteries that is unlikely to be solved. The family have definitely been traced back to a “Stilwell” line and so it is simply a case of the surname being mis-spelt and that mis-spelling becoming permanent. A William Stilwell from Ash in Surrey married a local girl, Elizabeth Green, and they had 4 children in the Farnham area who were all recorded as Stillaway in the baptism records. The eldest, Alan, married a Matilda Harding from Woking in Surrey. Woking is not that close to Farnham and that they married in Farnham suggests Matilda was living there for some reason at the the time. They had a large family. The first child was born in Sunbury, just across the Surrey border in Middlesex. the second child was born in Molesey just back inside Surrey and the next four in Canning Town, east of London where Alan was recorded on the census as being a dock labourer. The remaining 6 children were born in Grays, Essex. Many of the male descendants worked in ships as crew and this resulted in a number of tragedies in the family. The two youngest children, Albert and Arthur, were killed when their ship SS Minnehaha was torpedoed by a U-Boat in 1917. Neither were married. Another son, William, was lost at sea when the armed merchant cruiser HMS Clan McNaughton sank off the coast of Ireland in 1915. He left a widow and seven children. Two brothers, Alan and Albert, settled in Brisbane Australia but Albert was drowned when SS Dorrigo sank off the Queensland coast in 1926. He left a widow and five children. The Stillaways still have a strong presence in Australia to this day. This family did seem to suffer more than it’s fair share of tragedy.