The Medical Stilwell family of Moorcroft

James Stilwell (1762 – 1839) was born in Godalming. He is directly related to the land-owning branch of the Thursley family and his grandfather (also James) is the Stilwell who sold Lower House (see “Thursley Stilwells” page). His great grandfather (Thomas, 1663-1737) was also a surgeon but it is not known where Thomas qualified as a surgeon or, indeed, if he ever did attain a true qualification. This was the period when the term “quack” was used to define medical men of dubious qualifications.

Our James was fully qualified though and became a Member of the Royal College of Surgeons (MRCS) after training in Edinburgh. He started his medical career by running Lea Pale House in Guildford in the late 1700’s. This lunatic asylum held about 10 people whose family paid for the privilege for their relatives being housed there, and the visiting books of the time show the asylum to be well run. James must have decided there was money to be made and he purchased Moorcroft House in Hillingdon in Middlesex (about 2 miles north of where Heathrow Airport now is).

Moorcroft is recorded as being a working mental asylum by 1810, and James purchased it by 1818 although it is fairly certain he worked there before that year.

By 1814 James already had a family of 8 children. Of the six boys, four also went on to qualify as surgeons – quite a feat, and something requiring money. The sixth child, George, set up an asylum in Epsom. He died there in 1879 – just at the time when the London authorities were planning to build the large asylums on the hills around Epsom. There is no doubt that George was influential in the eventual location of these very large hospitals/asylums.

In the meantime, Moorcroft was expanded piecemeal until it became the very large (and not very pretty) building that exists today. The original house is almost unrecognisable, being squashed between the Victorian extensions and with a third floor added. See picture below.

The business started to slide downhill in the 20th century, particularly after WW1 when new regulations and the depression made it harder to make private asylums pay. The premises came into ownership of a female member of the family in 1953 and she had no interest in a run-down asylum and so the building was sold to the local council, and the asylum disbanded.

The records and day books show that the asylum was always well run and the Stilwells were very highly respected in the medical field of psychiatry. Later reports of these medical Stilwells show an almost universal respect for the family members. The descendants continued to qualify as medical men and run asylums. One family full of surgeons became established in Beckenham and became House Physicians to London Hospitals and local medical establishments.

The house became unloved by the local council and was in very poor condition by 2002, with some parts unusable because of roof leaks and damp. It was purchased by a development company for renovation and one part is a small-business complex with the main part being apartments and houses. Also on the site is a modern school and care centre for autistic children – thus carrying on the legacy of medical care at Moorcroft.

One member of the medical family decided not to follow into the medical world but go to Portugal in 1900 as an entrepreneur. He married a wealthy and royally-connected Portuguese lady and the family have been there since. The Portuguese branch of the Stilwells are doing very well for themselves and are involved in the golfing industry (the Stilwells built the first golf course in The Algarve). 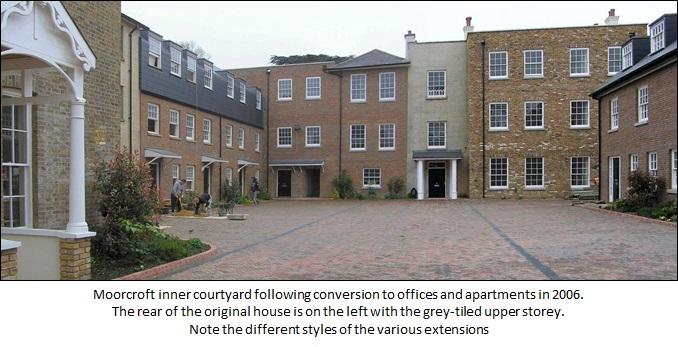