Almost nothing was known about this young man until a few years ago. What raises his profile above many of the other Stilwells is his father. John was almost certainly the illegitimate son of the Duke of York (King George III’s son). There is no record of a baptism but there are mentions of him in a number of military memoirs where he is stated as being the Duke’s son. He was commissioned in 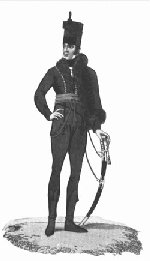 the famous 95th Regiment – The Rifles – in 1809 (Richard Cornwell’s fictitious “Sharpe” is of this Regiment). This is a prestigious regiment which is known to have commissioned at least one other of the Duke’s illegitimate sons. The image to the right is of the uniform of an officer of the Rifles.

Purchasing a commission in this regiment required contacts and money. Of major significance is that the Duchess of York recommended John’s commission to Horse Guards (as the governing body of the British Army was known in those days). It is unlikely that the Duke himself would have wanted to recommend an illegitimate son, but the fact that his wife did says a lot about the social and moral standards of the time. John purchased his promotion to 1st Lieutenant in 1811 (probably paid for by his father) and served in the Peninsular campaign (Portugal and Spain) from 1811 until 1813 when he was slightly wounded at Bayonne. He was mortally wounded at the Battle of Waterloo in 1815 and has no known grave. The Waterloo Prize Money register at The National Archives in Kew shows him as “DD” (Died on Duty) with no collection of the prize money due to him. His nickname in the Regiment was “Scamp”, suggesting a small, young and lively person. He does not appear in any memoirs or official histories of any battles but he did appear to be a popular young officer.

All the circumstantial evidence investigated by a number of people, including a professional historian, points to him being the Duke’s son. We have not been able to trace the mother’s name and therefore who she was, but she was not directly related to the land-owning Thursley or Dorking families, as these family’s ancestry is well recorded and there is no mention of him in any personal documents. It is likely that John’s mother was housekeeper, or a similar role, at one of the Duke’s houses – probably Oatlands, in Weybridge Surrey.