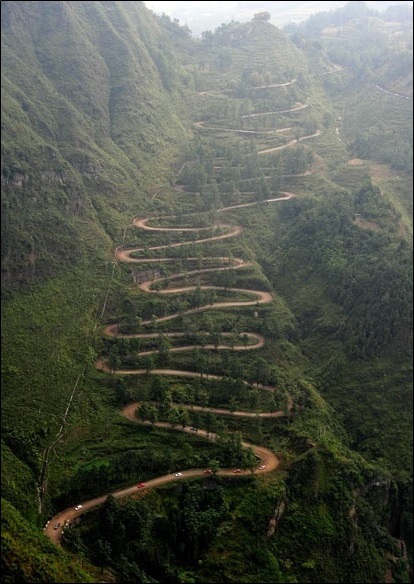 The Stilwell Road in Burma was a feat of engineering by the Americans in WWII to take an existing dirt road (called the Ledo Road) and engineer it into a double-tracked road that could be passable for 12 months of the year and be able to take the volume of traffic required to support the Allied campaign in the area. Probably recognising the American expertise in these type of large civil engineering projects, Allied command (mainly British) gave responsibility for the whole project to General Stilwell. The General appointed General Lewis Pick to do the engineering (he got a well deserved 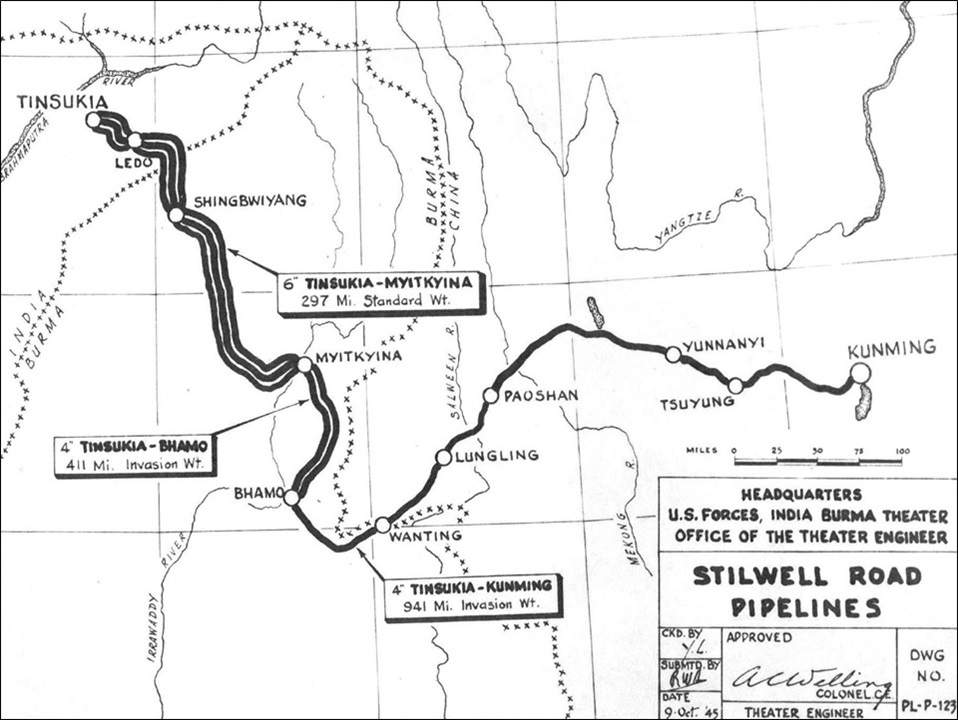 promotion on completion of the road). There was no time to survey in advance and so the American engineers surveyed and resolved as they went along. The road was built  in the face of appalling conditions and constant threat of disease. Despite this, the first and hardest section (117 miles) was finished slightly ahead of schedule. Much of the road meanders through the mountains and foothills, following the road of the old track. The road eventually joined with the existing Burma Road and the whole highway ended up 1079 miles long, joining Assam to China. 4″ pipelines were built along the side of the road to transport fuel across the area. I suspect another reason why the project was given to the Americans was the cost. The road was estimated to have cost $137m to construct – the impoverished wartime British economy could never have afforded that. 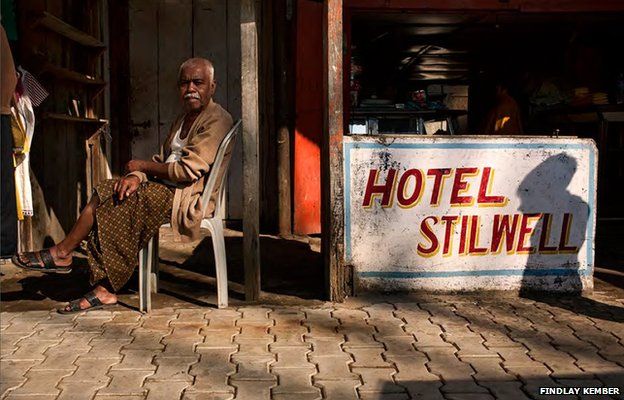 The murder of the unknown sailor

The murder of an unknown sailor put Hindhead (just south of Thursley) on the map in September 1786. 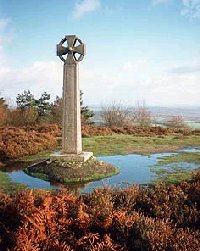 The perpetrators were soon caught and consequently hanged on a nearby hilltop, which has since become known as “Gibbet Hill”. The site, the second highest point in Surrey, is now marked by a Celtic cross (photo right), which overlooks the spectacular views of the Devil’s Punch Bowl. The people of Thursley were shocked and shamed that this brutal murder took place near their village. The unknown sailor was commemorated by the placing of a stone on the Old Portsmouth Road by James Stilwell of Cosford House. Charles Dicken’s“Nicholas Nickleby” has a passage in the book where he described the memorial: “They walked upon the rim of the Devil’s Punch Bowl, and Smike listened with greedy interest as Nicholas read the inscription upon the stone which, reared upon that wild spot, 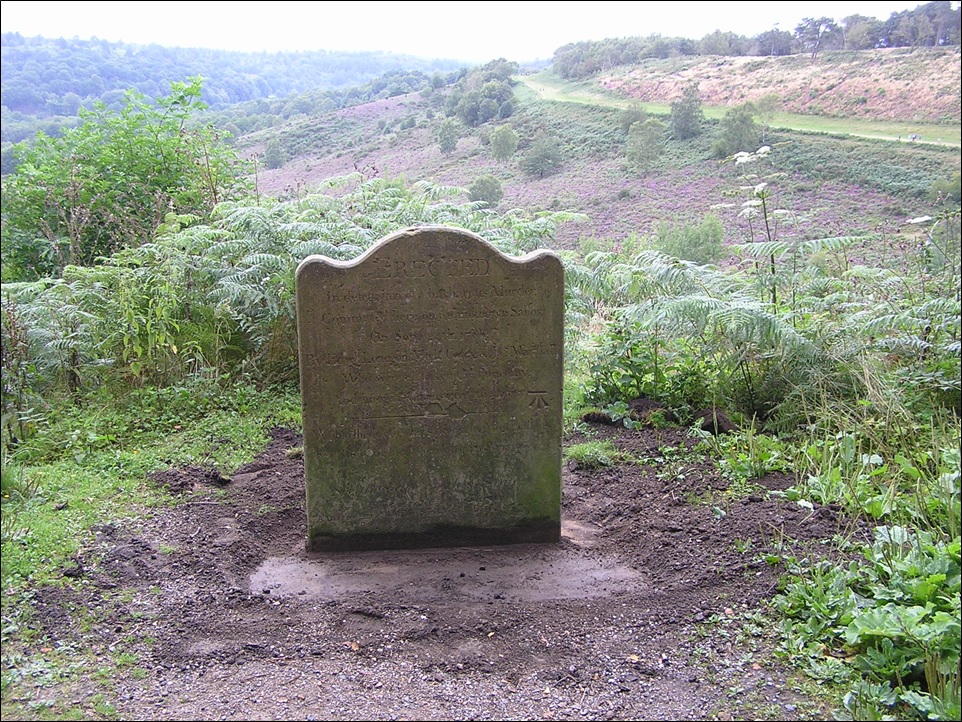 tells of a foul and treacherous murder committed there by night. The grass on which they stood had once been dyed with gore, and the blood of the murdered man had run down, drop by drop, into the hollow which gives the place its name. ‘The Devil’s Bowl’, thought Nicholas, as he looked into the void, ‘never held fitter liquor than that!’ “. Both the memorial and the Celtic Cross can be visited today, but only on foot/bike. Park either in Hindhead to the south or at the small car park on Boundless Road to the north, and get out your walking shoes or bike. The stone is close to the highest spot on the well-maintained track. The photograph to the left is from 2015. I give the stone a clean-up once a year. The unknown sailor was buried in Thursley churchyard and his grave is in a prominent place near the church.

Another murder – by a Stilwell

In 1803 a Stephen Stilwell was hanged for the murder of his wife, Mary Ann. They met whilst they both worked for a gentleman in Mortlake, near Richmond Surrey, where he was a gardener and she was in service in the house. It seems that she had a hot temper, and he didn’t know about this. They married and he took the opportunity to become the publican of the Jolly Gardeners pub in Mortlake, receiving his Victualler’s License in August 1801. On the night of 28th September 1802, lodgers in the pub, and a baker living in premises behind the pub, were woken by the sounds of an argument between Stephen and Mary Ann. Stephen was seen rushing from the premises, covered in blood, saying that he had “gained his liberty” and “damn it, set that house on fire”. He was apprehended. The people entering the house found Mary Ann with her “head beat in a shocking manner”. Stephen had apparently hit her with the butt of a pistol (probably because it mis-fired) and the broken butt was “covered in blood and brains”. There seemed little doubt about his guilt. He clearly could take no more of Mary Ann’s nagging, and murdered her. He was tried at Kingston Assizes on the 24th of March 1803, found guilty, and hanged soon after at Newington Prison (Southwark, London).

None of the records or newspaper publicity give Stephen’s age or place of birth, so I am unable to trace who he is.

This naval agency was established by John Gathorne (born 1726), a merchant trading with Madeira, Azores and South America, at Crutched Friars, City of London, next to the Navy Office by 1774. Gathorne later took his friend James Sykes into partnership and when Gathorne died in 1774, Sykes traded alone. The firm moved to 22 Arundel Street, Strand, in 1792 when the Navy Office was relocated to Somerset House. In 1813 Thomas Stilwell, a kinsman and directly related to the Dorking land-owning Stilwell family, was taken into partnership and the firm was initially known as “James Sykes, James Sykes junior & Thomas Stilwell”; later becoming “James Sykes & Thomas Stilwell”. Both the Sykes died in 1816, leaving Thomas Stilwell as sole partner. Stilwell was subsequently joined by his sons, John Gilliam Stilwell and Thomas Stilwell, and eventually his grandsons, and the firm was later known as “Stilwell & Sons”. The firm moved to Great George Street, Westminster, in 1884 and later to 42 Pall Mall. In 1923, when the partners were Geoffrey Holt Stilwell, John Bernard Lethbridge Stilwell and William Byron Stilwell, and its balance sheet totalled £164,620, the business was acquired by London bank Westminster Bank Ltd (est. 1836) in 1923 and is now incorporated into the large Natwest Bank.

Edward Stillwell started business about 1825, and it became Stillwell & Son in about 1852. They ceased trading about 1957. An 1881 directory listed them as: ”Edward Stillwell & Son, gold & silver lacemen & embroiderers, army & navy outfitters, cork helmet manufacturers & sword cutlers, Manchester & woollen warehousemen, & every description of Masonic clothing, jewels, furniture & fittings, tinsel, lace & trimmings, prize medal 1862 for good execution,25 & 26 Barbican, London EC; 6 Little Britain, London EC; & 29 Savile Row, Regent Street, London W”. Edward was born in Southwark and his widowed mother had enough money to apprentice him to a Daniel Atherley in 1802, a member of the Gold and Silver Wyre Drawers’ Company. Edward started his own business in St Giles (near the present Barbican in London) and was a successful businessman as he died in 1864 in Lewisham, London, a wealthy man. Items produced by this company include uniform buttons, regalia (particularly Masonic) and ceremonial weapons such as cavalry swords. Some of these – particularly the buttons – often come up for sale on eBay.