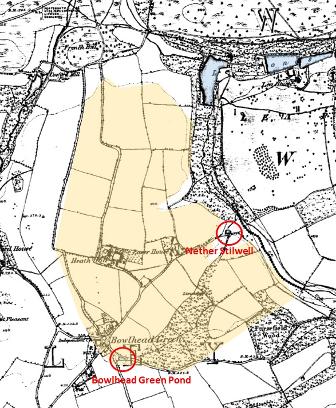 north of modern Bowlhead Green, Thursley, Surrey, with Nether Stilwell in the valley below the village. Note the plural of the former and singular of the latter. High Stilwells is mentioned in a number of legal documents from the 16th century regarding property in the northern side of the village now known as Bowlhead Green. The earliest reference has been traced back to a Richard de Stylewell (I’ve anglicised the spelling from the Latin) in a record from 1235.  It was initially believed that “High Stilwells” was the early name covering the whole of the current hamlet of Bowlhead Green, but is now believed to cover a few farms and homesteads mainly to the north (including Lower House). See the shaded area on the 1872 map on the right. The hamlet has a number of springs, brooks and streams that now all feed into artificial lakes in the valley below that were created on the Witley Estate by developer J Whitaker Wright in the late 1800s. This man has an extremely chequered reputation that warrants further investigation by the reader.

Note Bowlhead Green Pond in the map above. This pond is at the lowest point of Bowlhead Green and is the last remnant of any “wells” or springs in the village. The pond was created in the 1800s to collect all the rain and spring water run-off and store as a reservoir for the villagers and their animals. By 2014 the pond had been allowed to deteriorate badly, with the clay puddle lining breached by alder trees being allowed to grow out the pond, and by a number of trees that had fallen across it following bad floods in the winter of 2013/4. The pond would quickly dry up in dry weather as the water drained through the clay lining and into the greensand underneath. In 2015 I decided to clear the pond and reinstate it. Click on the link below to see the story and photographs of the pond renovation.