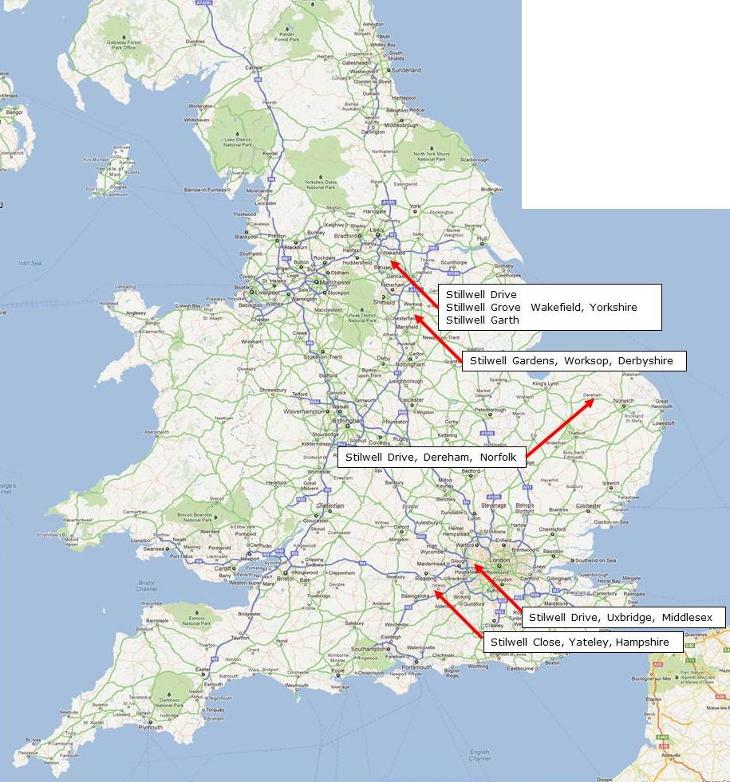 The five roads in Yorkshire, Norfolk and Derbyshire are all named after US General “Vinegar Joe” Stilwell. Shame the developers and the local authorities in Wakefield couldn’t be bothered getting the spelling of the name right.

Stilwell Close in Yateley is a newish road built on the site of Hilfield House, the “country” home of the London banking Stilwell family (also the head of the Dorking Stilwells). John Pakenham Stilwell inherited the house through his wife in 1863. The original burnt down in 1901 and was re-built. It was sold by the family between the wars and was demolished in 1973 after becoming run down and the victim of another fire.

Stilwell Drive in Uxbridge is a modern road built close to the site of Moorcroft, the asylum run by the medical Stilwells until the 1950s. If you travel north from Heathrow Airport on the A408 you will reach a roundabout just north of Stockley Park. This is the “Stilwell Roundabout”, and named after the same family. Moorcroft (now refurbished and converted to posh accommodation) is at the end of West Drayton Rd, the right fork at that roundabout.

That’s it! No more British Stilwell/Stillwell locations to brag about.