All true Stilwell/Stillwells are related. The name is a single-source one and originates from the parish of 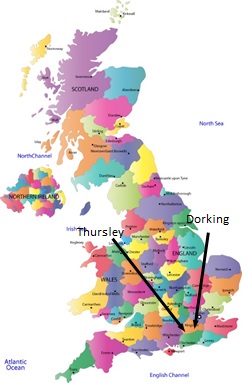 Thursley, near Godalming in Surrey, England. The original spelling was Stylewell, and means “pure spring” and is named after natural springs in the area of Bowlhead Green in Thursley. These springs gave the name “High Stylewells” to the area, which had settled as “High Stilwells by the 1600s. Note the plural, denoting an area where there would have been a number of springs. See my “High Stylewells” page from the link at the bottom of this page.The first record of the name “Stilwell” is in 1235 in the Godalming Court records where a “Ricardus de Stiyelewell” is mentioned. Later records for the name up to the early 1500’s are all in the same area. From 1515, baptisms of Stilwells are also recorded in nearby Dorking, and this branch of the family grew in the area and ultimately became successful. Almost all the records up until 1600 are for families in Surrey. There are a few families just across the county borders in Hampshire and Sussex and two families in Holborn, London (who originally came from Dorking). By the mid 1700’s a few more Stilwell families had moved to London (mainly to Stepney/ Whitechapel) as weavers and others inevitably followed in search of work and wealth.

Until the arrival of the Railways in the early 1800’s, the name “Stilwell” does not appear anywhere in England apart from Surrey, Sussex, London and south Hampshire. The double-L mis-spelling that created the “Stillwell” surname mainly occurred in the London baptisms where the name was recorded phonetically in churches where the family had no roots and so the correct spelling was unknown. This mis-spelling extends to the Stillawaysurname. This unusual spelling can be found in the 1700 and 1800s in Surrey and Sussex. Although many can be proved to be mis-spellings of Stilwell/Stillwell there are some, particularly originating from Henfield in Sussex, that cannot categorically be proved to be Stilwells, but they almost certainly are. Most Stillawayshad reverted the spelling back to Stilwell or Stillwell by the 1900s, but a few families retained the misspelling. That surname is extremely rare in Britain today. See the Stillaway page under the Key Families menu item.