Apart from the “Thursley” family, the other main Stilwell dynasty is centred just a few miles south-west of Dorking. The history of this family was recorded in detail by John Pakenham Stilwell in the early 1900s.

It is assumed that a Stilwell travelled from the Thursley/Witley area in the late 1400’s or early 1500’s, following a marriage to a Dorking lady. This can be surmised as the family is recorded as owners of a house and woodland in the 1500’s and it is unlikely that the family at that time would have been able to afford to purchase or rent property of this size or value. The Dorking family were more close-knit than the Thursley branch, and seemed to prosper in a relatively small area. They were mainly woodsmen and lumber merchants in the 1500 and 1600s (and became relatively wealthy selling the timber) but eventually became Navy Agents and Merchant Bankers in London.

The first record of a Stilwell in the Dorking area is a baptism in 1515 of a John Stilwell. He was the first of seven children but, unusually, the parent’s names are not recorded on the parish records for any of these baptisms. Fortunately, the baptism/marriage/burial records for Dorking are complete so the rest of this family line is very accurately traced right through to the present day. The Dorking Stilwells inherited (or owned/rented) a small house called Colletmoor Farm (now called Collickmore Farm), just south of Dorking in Surrey. Although the original house was modest there seemed to either be a lot of land, or the family had the rights to the substantial amounts of timber in the immediate area. It should be remembered that this is one of the great shipbuilding eras in British history, and Surrey was known for its timber and there would have been many oaks on the land. The family clearly became relatively wealthy as they extended the house in the 1600’s with a very grand chimney – right at the time of the hearth tax. This would be the equivalent of the modern “we have arrived”. See the photograph below of Collickmore Farmhouse in 1999. The house cannot be accessed or viewed from any public right of way. Please note that it is and the end of a private lane, is in the centre of a working farm and stables, and is being renovated, and so casual visitors are not welcome.

The other clue to the prosperity is that the descendants stayed in the area and acquired houses and lands in the immediate vicinity. However, the Dorking family produced the first Stilwells born in London. The two eldest children of Richard and Elizabeth (nee Peeke) had connections with London. The eldest son John was born in Dorking in 1596 but married, twice, in Cripplegate and had 9 surviving children born in London. He was recorded as a comb maker, which is not the sort of occupation that would be expected from a descendant of a family of Surrey woodsmen. It is believed that this first “London” Stilwell family line died out through no male heir. The second son, Richard, was the opposite of his brother John in that he was born in Holborn but married and had a family back in Dorking. The remaining children of Richard and Elizabeth (Peeke) were born in Surrey, suggesting that this family’s move to London was not entirely successful.

The family steadily grew but tended not to move far from the Dorking area. One exception is a Daniel Stilwell who moved to east London in the late 1600’s, probably as a weaver in search of work opportunities as east London was the centre of the London weaving industry. He married an Ann Starkey in Stepney in 1696. This is the second recorded move of any Stilwells to London, and this Daniel established the “London” branch of the family. Most of the London Stilwells (including many who were mis-spelt as Stillwell) can be traced back to this Daniel. Some descendants of Daniel and Ann became established in the silk weaving industry – a natural progression of their weaving skills.  In the meantime, one member of the main land-owning Dorking family was doing well. Thomas Stilwell (1762-1846), at the age of 14, started working for his uncle, James Sykes, Naval Agent of London. He became a partner, and on the death of James Sykes, the bank became Stilwell and Sons. The bank has since been absorbed into the NatWest Bank conglomerate.

The rather fearsome looking John Pakenham Stilwell (see photo below) inherited the banking business and also inherited in 1863, through his wife, a house in Yateley (Hampshire) called Hilfield, and the family moved there in the 1870’s. John Pakenham became a Justice of the Peace (local judge), Colonel of the Hampshire Regiment (a Territorial regiment at the time), and Lord Lieutenant of Surrey. His seven surviving children all did well for themselves. Eldest son and heir, Geoffrey Holt Stilwell (1865-1927) became a Lt. Col. in the 4th Hampshire Regiment. He was killed in a road accident whilst riding a bicycle. The other two sons, John Bernard Lethbridge and William Byron, also became Lt. Cols. in the 4th Hampshire Regiment.

John Pakenham’s younger brother was at one point High Sheriff of Dorset (which is a bit odd as he lived in Wiltshire at the time).

Stilwell family life in Yateley didn’t seem to be too successful as the original house burnt down in 1901, was rebuilt (photo below), but was recently pulled down to be replaced by housing. The only legacy remaining is an uninspiring local road called Stilwell Close.

This branch of the family is still going strong with members in South Africa, Tasmania and Canada, as well as in England.

Many US Stilwells believe their founder, Nicholas Stilwell, originates from this Dorking branch of the family, but there is no evidence for this. See the USA Stilwells link for more. 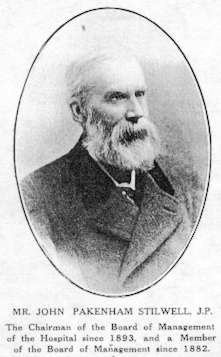