There are two Stillwell places in Antarctica and both are named after Australian geologist Frank Stillwell. As you can imagine, these places are not on the normal tourist routes but are visited regularly by tough people wearing lots of warm clothes and doing serious things in the name of research. 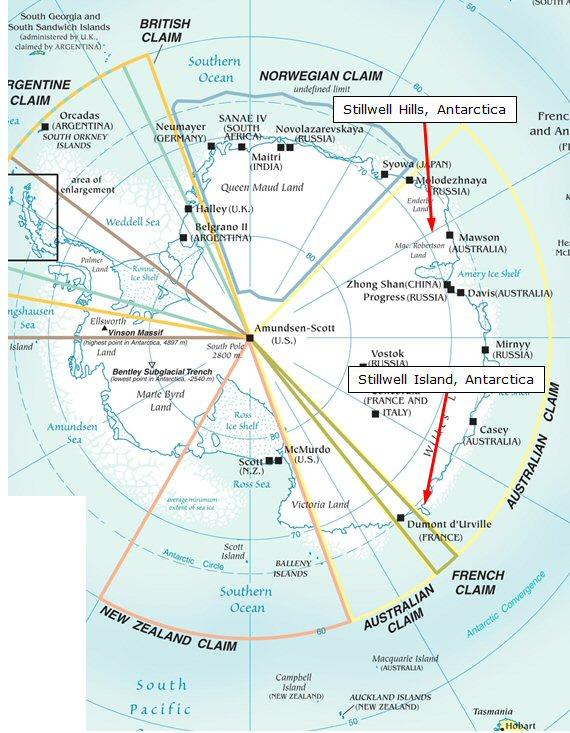 Stillwell Island is not much more than a big rock, but it’s dramatic. Stillwell Hills are peaks that rise above the snow-covered land near the coast. As no Stillwell has to been to either of them recently to take photographs (come on you lot!) you can go to Australian government web sites and see photographs of them:

Official description: “Stillwell Island” is a small, steep rocky island, 0.25 nautical miles (0.5 km) in diameter, which is the largest member of the Way Archipelago. It lies at the west side of the entrance to Watt Bay, 1.5 nautical miles (2.8 km) northeast of Garnet Point. Discovered by the Australasian Antarctic Expedition (1911-14) under Douglas Mawson. He named it for Frank L. Stillwell, geologist with the expedition whose detailed survey included this coastal area.

Official description: “Stillwell Hills” is a group of rocky hills composed of banded gneisses and including Kemp Peak and Lealand Bluff, extending along the southwest side of William Scoresby Bay. This area was explored by DI personnel on the William Scoresby in February 1936, and by the Lars Christensen Expedition, 1936-37, the latter group taking air photos used to map these hills for the first time. Geologic investigation of the area was made by ANARE (Australian National Antarctic Research Expeditions) in 1961. Named by Antarctic Names Committee of Australia (ANCA) for Dr. F.L. Stillwell, geologist with Australasian Antarctic Expedition, 1911-14, who derived a theory of metamorphic differentiation from banded gneisses of the same type on George V Coast.